Now that  American Idol has officially crowned it's champion, it's time to have a little fun with some bad lip reading.  Enjoy.

If you've seen a Dierks Bentley video odds are you've seen his beloved white truck. The truck that the song 'I Hold On' is actually based about. But if you…

Gary Allan took the stage on The Late Show with David Letterman Tuesday evening to perform his current single, It Ain't The Whiskey.  As usual, the object of my undying…

I was sent this video for Cathedral Pines by The Grahams a while back and finally watched it. It's definitely cool in a sultry and different sort of way (they…

Check out the new video for Eric Church's Give Me Back My Hometown.  While I'm not 100% sure what the heck is going on in the video, I love the…

Facebook Oh man, it looks like Eric Church is going to try and make fans shed a few tears when his video for Give Me Back My Hometown debuts tomorrow.…

If you're one of those who thinks that country music has gone straight down the crapper then this Year-in-Review video that Farce the Music featured this morning is for you.

Eric Church has done it again! Earlier this month, Eric posted a mystery video that ended up being the trailer for his single, The Outsiders.  Now he's gone and…

On Tuesday, Eric Church released a mysterious video without an explanation. Now we've got a little more info about what it all means.  From my radio buddy Broadway:  "The Outsiders" is…

Eric Church released this mysterious video this morning with no explanation of its meaning.  In the video description it says only, "On Oct 22 you'll find out just who we… 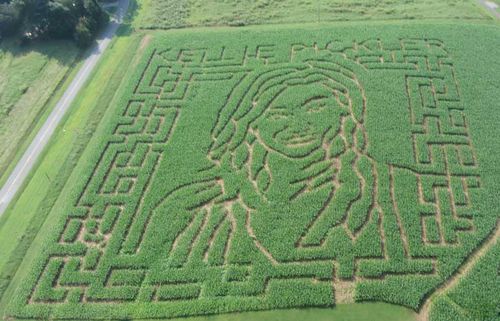 As in years past, a country star’s likeness has found it’s way into a corn maze.

The Shelby Corn Maze in Shelby, North Carolina decided this year to put Kellie Pickler’s face in their 8 acre corn maze after she won Dancing With The Stars.

Owner Alice Pyron tells WBTV, “We were watching dancing with the stars, and said if she makes it, we’re going to put her in the maze.” Kellie won the show and now she’ll be having her face trampled by thousands of people this Halloween season.

END_OF_DOCUMENT_TOKEN_TO_BE_REPLACED

Continue Reading Kellie Pickler gets honored with a corn maze