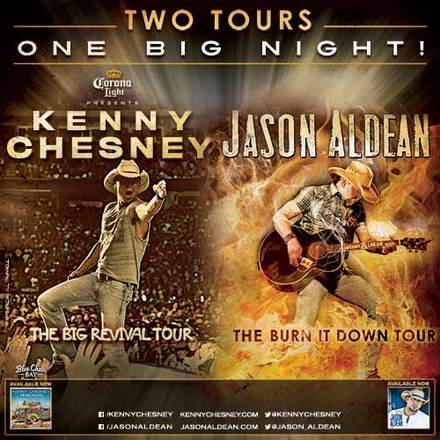 Well here's an amazing and surprising announcement for fans – Kenny Chesney and Jason Aldean will be performing 10 stadium shows together next summer.

Anticipation for the summer of 2015 just hit record highs as Jason Aldean and Kenny Chesney have announced that their tours, The Burn It Down Tour and The Big Revival Tour presented by Corona Light, will collide for 10 stadium shows next summer. The first shows to go on sale for the unprecedented pairing are New England’s Gillette Stadium on Aug. 28, 2015 and San Francisco's Levi’s Stadium on May 2, 2015. More on-sale information and special guests will be revealed over the coming weeks.

“We’ve played so many of these stadiums so many summers, I know just how hard the fans coming out can rock,” Chesney says. “There aren’t a lot of guys out there who can hit it the way Jason does, so I’m glad we’re able to bring both of our tours together for 10 nights this summer. I know what me and the guys are bringing in terms of music, and I know Jason can hang with us!”

“Kenny is the guy everybody in country music looks up to when they think about workin’ hard, building your career out on the road and getting to eventually play stadiums,” added Aldean. “When we first started dipping our toe into that business a few years ago, he’s the guy I would call or text for advice. We have a real friendship. Don’t get me wrong…that doesn’t mean I’m going to make it easy to follow me every night…he’s gonna have to work for it harder than he ever has before!”

The Aldean Army and Chesney’s No Shoes Nation are both known for their ability to work hard and play harder. With a strong commitment to living in the moment, these shows are destined to be a once-in-lifetime pairing – and everything summer, friends and music are meant to embrace.

Chesney, whose The Big Revival marked his 13th No. 1 Country Album debut, already topped the Billboard Country Songs chart for two weeks with “American Kids” — and “Til It’s Gone,” the follow-up, is currently at No. 18 with a bullet.

Jason Aldean, whose Old Boots, New Dirt debuted at No. one on Billboard’s Top 200 Album charts earlier this month, is known for his high-intensity shows, his sense of true grit and songs that capture the way his fans genuinely live their lives. The most downloaded male country artist in history and two-time Academy of Country Music Male Vocalist of the Year is also currently sitting at the No. one spot on country radio charts with lead single “Burnin’ It Down Multi-platinum, award-winning singer  Sara Evans  will be performing a live series of virtual full band concerts in partnership with VYE over three nights on December 10-12. Exclusive: Rachele Lynae on “Fishin’ for Something,” working with Jamie O’Neal on debut album and more

Rachele Lynae grew up in Alaska, an unlikely place for an aspiring Country singer, but she owes her life to the off-beat upbringing. Early on, she

Toby Keith is set to release his new CD, Drinks After Work, on October 29, but you can now stream it in its entirety on SaraBeth Gets the World Ready for Girl Scout Cookie Season

It’s equal parts the most dreaded and most anticipated time of the year — Girl Scout cookie time! For those of you who are like

And just like that, the 51st Annual Academy of Country Music Awards has come to an end. The ACMs brought us star-studded performances, cross-genre cameos,

Gary Allan celebrates the first anniversary of his Nashville men’s boutique, The Label

Gary Allan celebrated the one-year anniversary of The Label, his chic menswear store in Nashville.

Taylor Swift has dabbled in acting over the years, but it sounds like she may finally have her first real acting job lined up, and