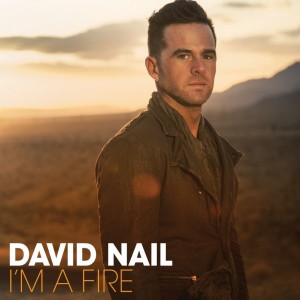 Nail, who co-wrote four of the 11 songs, says “There’s so many moments on this record that make me think about the last four years that I’ve been married, and I’m a Fire just sums it all up.” He adds “It [the title track] says, ‘I’ve walked through flames, come out on the other end, and the foremost reason is because of you.’”Many of Nashville’s finest songwriters are featured on the album. Along with David, you can also find songs by Brandy Clark, Shane McAnally, Scooter Carusoe, Jay Knowles, Lee Thomas Miller, Neil Thrasher, Jaren Johnston, Tom Douglas and evenBrett Eldredge.I’m A Fire boasts 11 tracks including “When They’re Gone (Lyle County)” which features harmonies by past tour mates Little Big Town, “Kiss You Tonight” a song that expresses the strong emotion that we all feel at some point in our lives for another, the steamy “Burnin’ Bed” and one of the most special moments on the album, the cover of Glen Campbell’s “Galveston;” which Nail turns into a duet with in one of country music’s sweetest songbirds, Lee Ann Womack.

1. Whatever She’s Got [Written by Jimmy Robbins and Jon Nite]

7. The Secret [Written by David Nail and Scooter Carusoe]

10. I’m A Fire [Written by Jaren Johnston and Tom Douglas]

For more information on David Nail and for a full list of tour dates visit www.davidnail.com

Kenny Chesney has built a career on offering hope, passion and the straight-cut joy of being alive. “American Kids” celebrated the exuberance of being young, truly original and coloring outside the lines. “Get Along” not only captured the reality of how much sweeter life is by coming together to create a community, but inspired a PSA which amassed close to three billion viewings for PassItOn.org.

Lady Antebellum’s Charles Kelley and Dave Haywood got a psychic reading together. No, really

Well color me surprised. Earlier today I received an email with the title “Lady Antebellum Gets Eerily True Psychic Predictions.” It landed in my junk

Who knew sign language could be so much fun to watch? I don't know American Sign Language so I suppose this guy could be signing

When it comes to catching an artist’s attention in concert, fans usually try a variety of techniques ranging from holding up signs, wearing homemade T-shirts

Exclusive Interview: Catch Up with Jessie James Decker This Christmas!

I have now been fortunate enough to interview Jessie James Decker on several occasions, and the common theme is that I will always get to