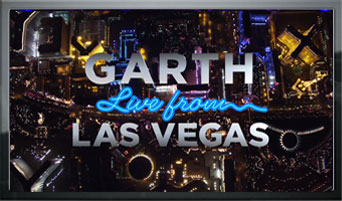 "We're thrilled whenever we get the opportunity to create a television event with an amazing live performer, and there is no one better than Garth Brooks," said Jack Sussman, Executive Vice President, Specials & Events. "Garth will give the audience a rare opportunity to not only hear his classic hits, but also the music that became the soundtrack of his life and how those influences from the country, rock and pop worlds set him on the road to become the biggest selling solo artist in history."

In 2009, Brooks announced that he was out of retirement and entered a multi-year "relationship" with Las Vegas resort developer Steve Wynn for performances at his Encore Theatre at the Wynn Las Vegas. The show has been hailed by the Los Angeles Times as "genius," by EW.com as an "absolute revelation," and Oprah Winfrey deemed it the "hottest ticket."

Newcomer Austin Webb strikes a balance between commercial viability and artistic excellence, as evidenced by his debut single "It's All Good," which cracked at No. 53 on

Wow, so this British journalist and TV personality is either really enjoying her five minutes of fame from this situation or she’s completely lost her marbles because she’s now taken her attacks to television just a couple weeks after ranting on Twitter about Kelly Clarkson’s weight.

Fox announced today that the original TV talent show American Idol has been renewed – but for one final season, its 15th. With the season

Many artists have that one song that they will always be remembered for more than the others. Kenny Rogers has The Gambler (as well as

Gary Allan took the stage on The Late Show with David Letterman Tuesday evening to perform his current single, It Ain't The Whiskey.  As usual,