Brad Paisley not one bit sorry about pissing people off 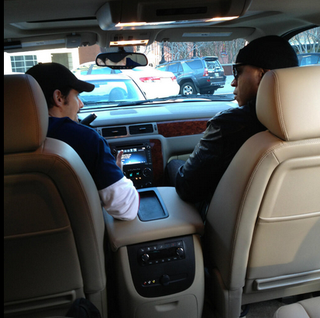 It was sort of a toss-up of whether people didn't like the song's message or just didn't like the song because they were confused by it, but the vocal critics did all agree on one thing, the song was crap, with sites such as Jezebel, Gawker, and Popdust all weighing in on just how horrid it was.

I feel bad for Brad because he really did feel good about writing the song. He said he wrote the song to get a conversation started. I think he probably got more conversation than he bargained for.

As for where Brad got the idea for the song, he recently told The Tennesean:

The track is part of Paisley's new album, "Wheelhouse," and was sparked by the reaction the country star said he received after he wore a shirt with the Confederate flag on it to showcase his adoration for the band Alabama.

“I was called a racist on Twitter for that,” Paisley told The Tennessean. “That was the beginning of this song: Me thinking, ‘Am I a racist? Is that all it takes?’"

Yesterday, Brad stayed quiet on the controversy, letting fans and non-fans have their say and express their views. It had to be tough considering how mean people were being, but I actually like to think Brad was just sitting back smiling, knowing that the conversation he wanted to start was definitely started, even if it was a little more heated than he probably imagined it would be.

Hey, the world — black, white, latino, asian — united for a little while. Even if the unification of the races was mostly in hatred for his song, Brad did manage to bring people together. Mission accomplished I think.

Despite remaining mostly quiet on the subject yesterday, Brad did visit "The Ellen DeGeneres Show" for a segment airing today and talked about what was going on:

"I don't know if any of you noticed, but there is some racial tension, here and there. It kind of deals with that and I felt like when we were writing this song it wasn't necessarily up to the media. I don't really trust sort of, I guess, Hollywood … or sort of talk radio or anything like that to deal with that anymore. I think it's music's turn to have the conversation."

When Ellen pushed a bit by saying, "You're basically saying…" Brad replied, "I don't know."

This morning Brad broke his sort of Twitter silence by saying that he wouldn't change a thing if he could.

…I hope the album rocks you,soothes you,raises questions,answers,evokes feelings, all the way through until Officially Alive

'Cause I wouldn't change a thing. This is a record meant to be FAR from easy listening. But fun. Like life. Have a ball, ya'll. love- brad

Well if controversy equals album sales, I do believe Brad's new album Wheelhouse is going to be his most successful album yet.

So what do you guys think of the song? You can listen to it here if you haven't had the chance to hear it yet. You better listen quick, though, since the song is being removed from the web as quickly as new copies are being put up. Jamie Lynn Spears Gets the Surprise of a Lifetime On Opry Stage (Watch!)

There are few things we love seeing more than Jamie Lynn Spears making her rounds in Nashville. It gives us great hope that there is In case you missed it yesterday, Broken Bow Records’ Dustin Lynch premiered the lyric video for his new single Mind Reader yesterday, 10/19. The single is the third from his latest album Where It’s At.