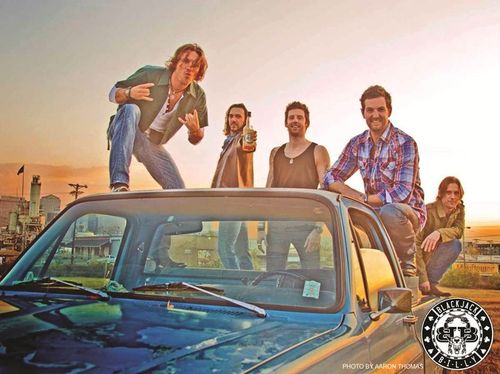 They’re a band who bill themselves as something brand new
and revolutionary and say they’re “on
the verge of taking over the world”. Big claims, especially when they also
call their music a melting pot of country, blues, soul, rock and hip hop, and
that they sound like Jason Aldean, Toby Keith, Lynyrd Skynryd, Eric Chuch and
Brantley Gilbert.

So just who are these guys, so sure of their place within
the country rock canon? Meet Rob
Blackledge (vocals & guitar) and Noll Billings (vocals) – they are the
key and founding members of Blackjack Billy. From Madison, MS and Kennett, MO
respectively, Rob started off touring as a solo artist and attending Belmont
School of Music Business, while Noll signed a publishing deal as a songwriter
with EMI Music Group, also attempting a solo career. Neither were very
successful until they met in Nashville in January 2011, and began writing
together. They teamed up with producer Jeff Coplan and signed to Vandermont
Music, and added a few members to the band, including their producer Jeff
Coplan (guitar), Patrick Cornell (bass, they met him when he moved to Nashville
from LA) and Brad Cummings (drums). Since then they have shared the stage with Lynyrd Skynyrd, Justin Moore, Dustin Lynch,
The Doobie Brothers, Trent Tomlinson, The Usual Suspects, Lady Antebellum, One
Republic, Tonic, Josh Hoge, Will Hoge, Chris Young, Easton Corbin and Lo Cash
Cowboys. The last few months they’ve been touring around the south, and are on the rise with some great press.

So in the wake of all this hype and success, I decided to
interview the band, to find out what’s to come, where it’s all come from and what makes them tick. Read the full exclusive interview after the jump.

END_OF_DOCUMENT_TOKEN_TO_BE_REPLACED

Continue Reading Are Blackjack Billy Set To Be The Rolling Stones of Country Music? [EXCLUSIVE INTERVIEW]